... that our friend was in a
Tide detergent commercial
some years ago??

It's really pretty cool... check it out!

A star is born 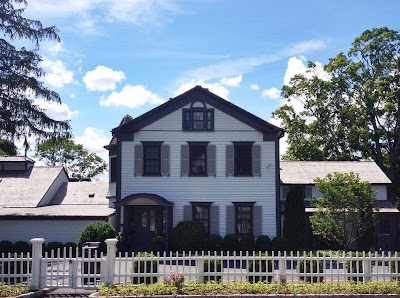 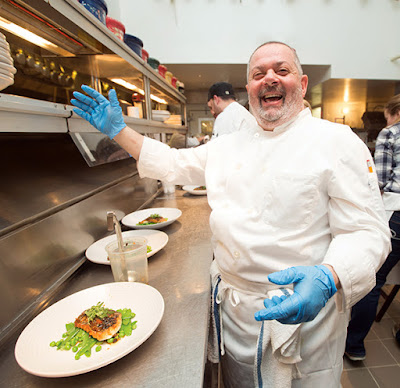 Email ThisBlogThis!Share to TwitterShare to FacebookShare to Pinterest
Labels: Did You Know???


Is there a draft in here??

There’s not much to say about this bit of bare-assed excitement, except to say that I was obviously the "butt" end result of a dare.


It happened at the Six Flags Great Adventure amusement park. I was with my friend Michael and his girlfriend Patty. 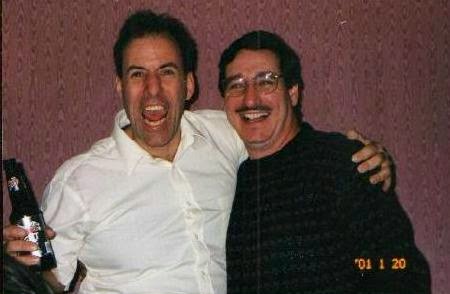 We were there to see The Joe Perry Project
play a show. One of our rock 'n roll hero's. 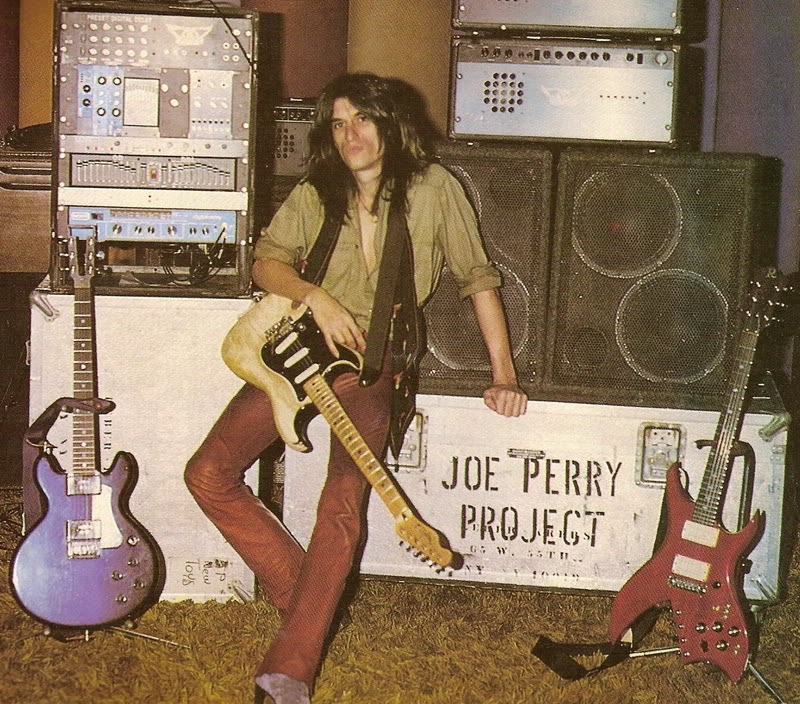 Mike and I were both big fans, and Patty, well, she was there because she was just the coolest girlfriend I have ever seen. She hung with us idiots through thick and thin! LoL


Well, I remember being there and standing in the crowd rockin’ to the Project. I was wearing a pair of real short shorts (no underwear of course), and a cut-off tee shirt showin’ off
my stealthy self to the world!


I was a regular looking guy at this point, and most of the chubbiness had subsided.


I remember standing side-by-side in the crowd, then hearing a song come to an end. The three of us immediately raised our arms to the sky in applause when it happened.


Someone had just pulled my shorts
down to my ankles!


I calmly turned to Michael and said...

“Hey Mike, are my balls hangin’ out?”


Michael turned, looked down, and said...

“Tom, man,
your shorts are around your ankles!”


The many beers we’d consumed
had slowed my awareness as you could
plainly see. We were never the ones
to shy away from "too" many... beers!!


Now you have to picture this.


Our hands were still in the air
clapping for the last song,
and my shorts were down at my ankles.


Then, Michael  just held out his right hand in a cupping motion while saying...


Referring to my balls flappin’ in the breeze. LoL


I finally realized what the fuck had just happened, and I reached down and pulled my shorts back up. And then a couple guys
that were standing behind us yelled out...


Michael and me spotted the culprit and took off in a desperate drunken chase after her.


No, not to bitch slap her silly, or anything like that. I just wanted to know what she was doin’ after the show. Hey, I’d take it
anyway I could get it my friend! LoL


But, we never did catch her.
She disappeared into the swollen crowd.


Fuck!
Another one got away.


We were just cracking up with laughter the whole rest of the day. Michael just kept holding out his hand, cupping the air while saying...


Hahahahaha... what a douche bag LoLoLoL


Here I am with my dick hangin’ out just waiting for someone to grab hold, and what happens?


The fuckin’ chick runs away!


I tell ya, my dick gets less respect than I do.
It was the Rodney Dangerfield of cock! 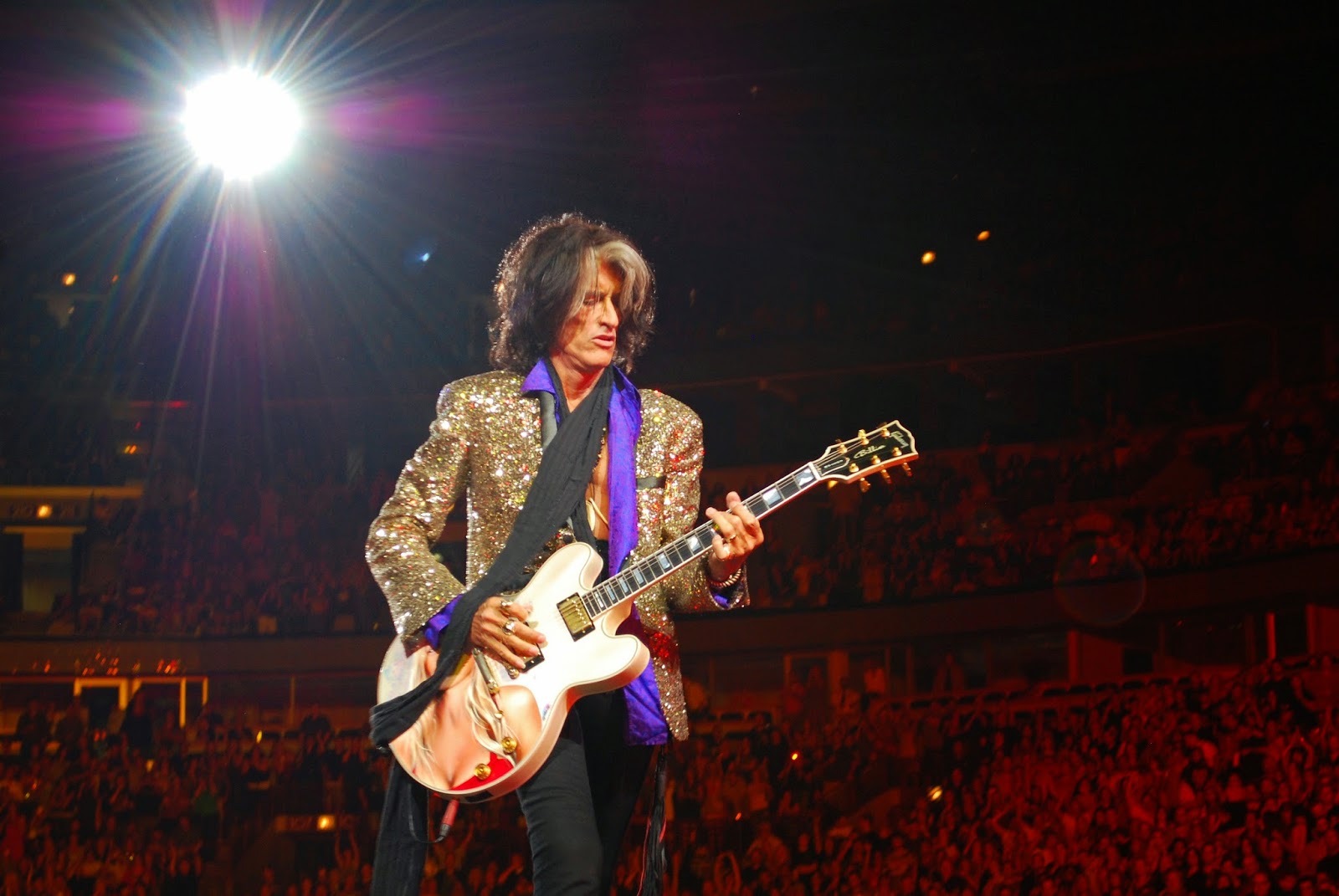 The Ups & Down's of Nimitz Life


Here’s just a little silliness that went on during my stay aboard the beast. I hope you have a couple chuckles along the way.


We used to work in shifts of twelve hours on and twelve hours off, while at sea. Now, that was seven days a week my friends. There were no weekends consumed by drinking and humping while out to sea.


But... I really didn’t have it too bad
at all though on the ship.


You see I worked in a clean,  air-conditioned closed-shop environment, with a pretty awesome stereo setup to boot! One or two of those components were mine. I think just the cassette deck. Cassette??? LoL Remember now,
this was only 1982! 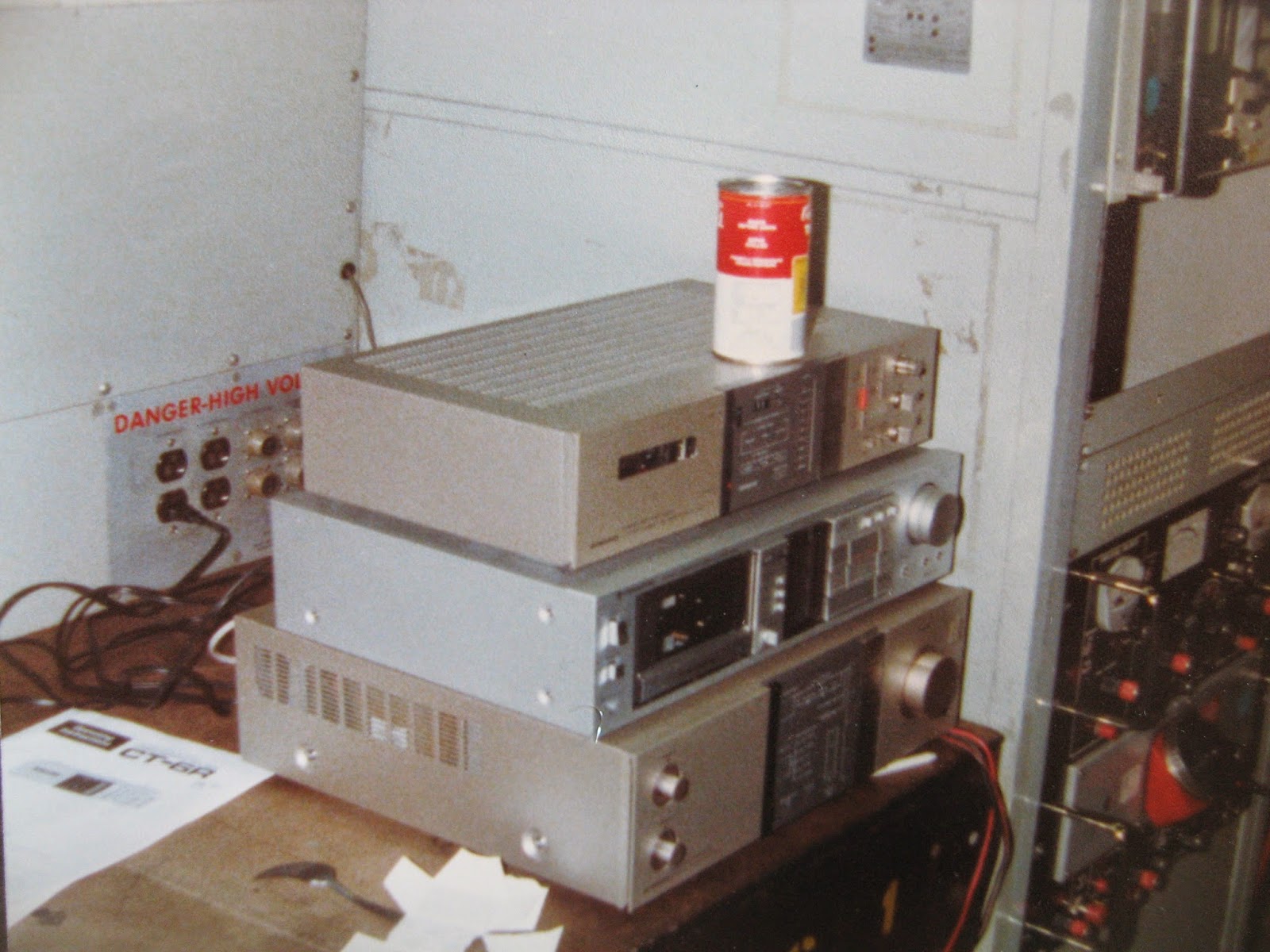 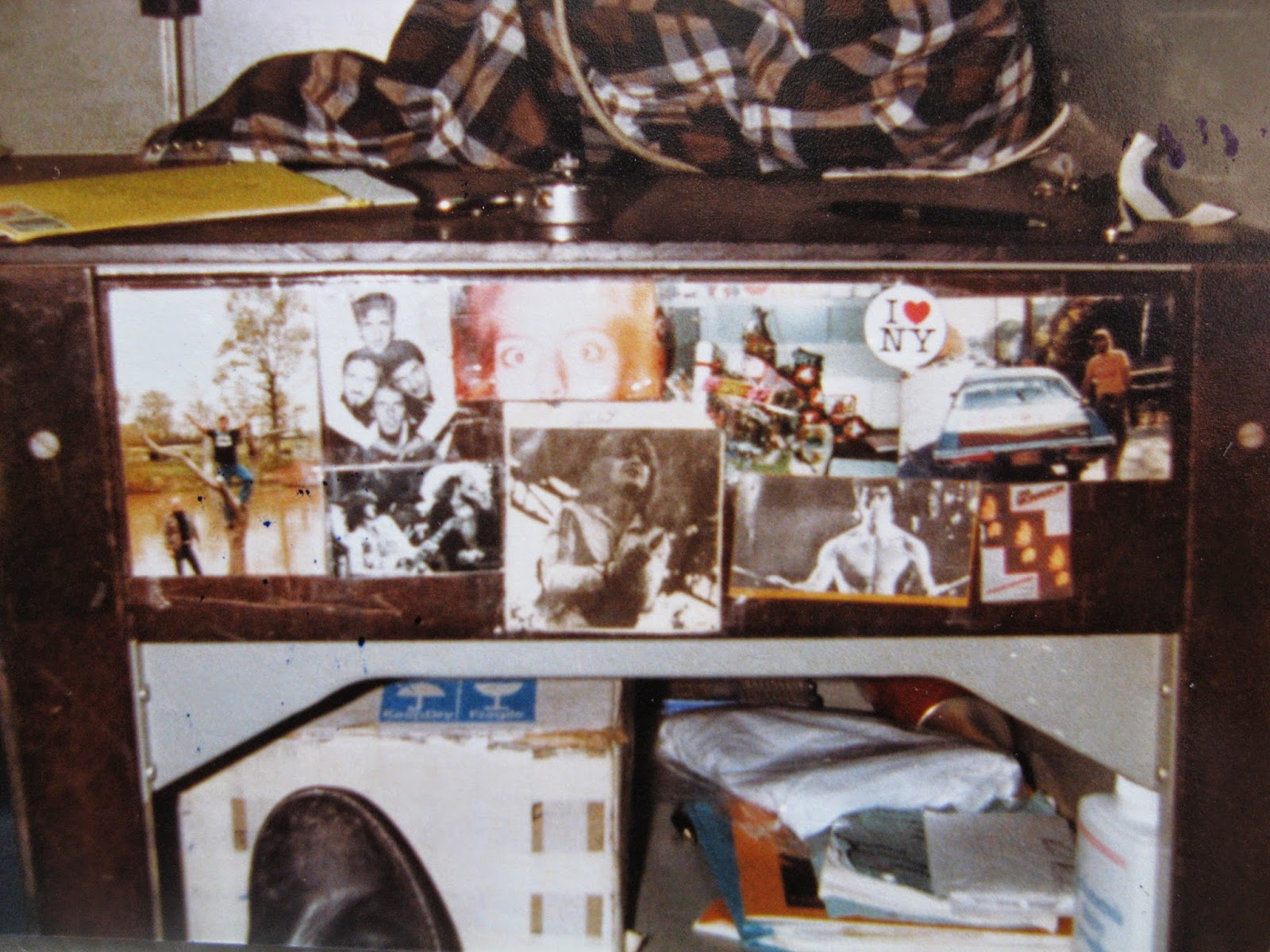 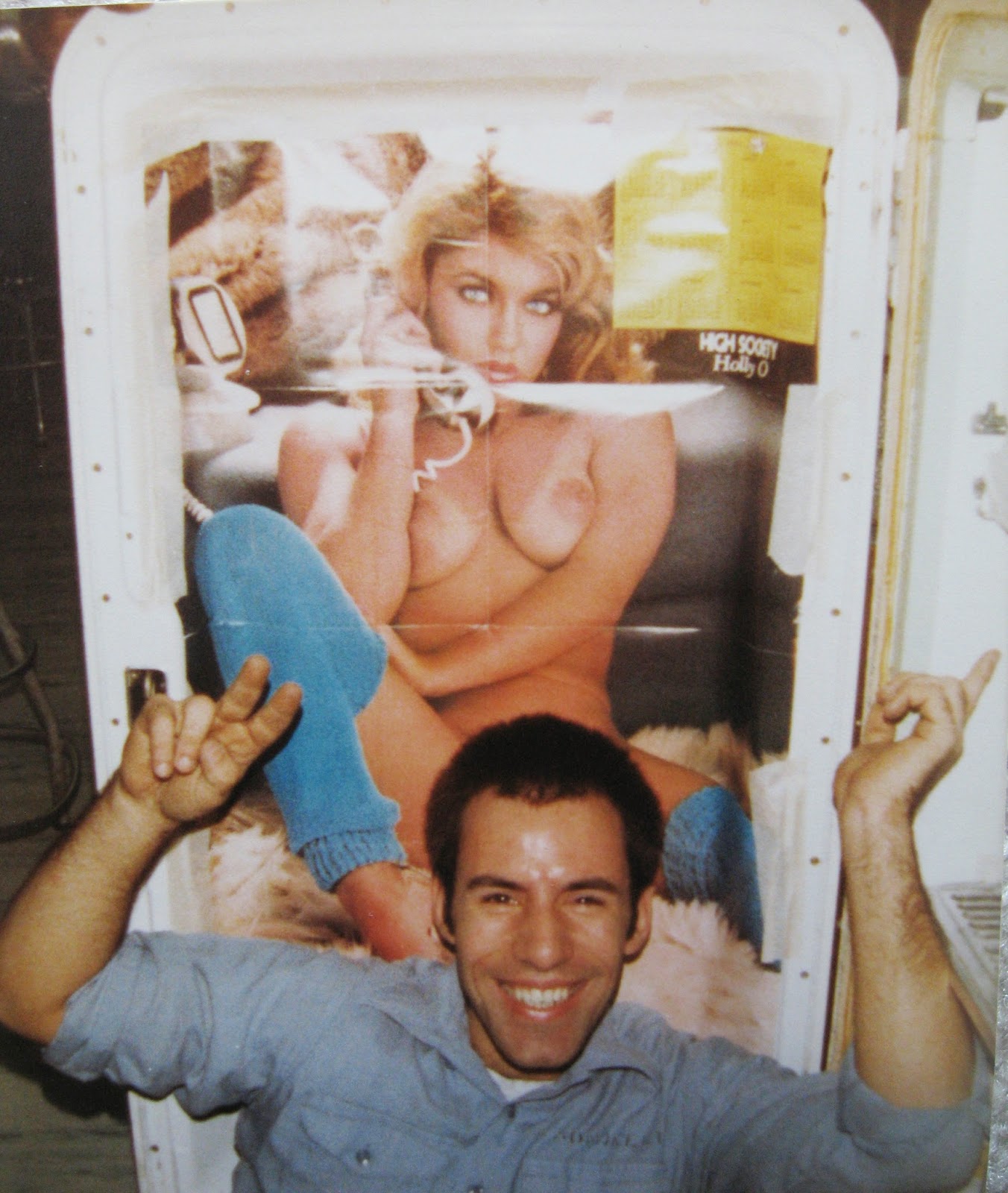 So, I couldn’t complain all too much compared to what the rest of the guys on board had to deal with on a daily basis.


Well, eventually, I shed the new guy on the block image you read about in the first Nimitz Diaries entry Riff Raff. And began to find my place.


The cocky fourth floor leader was beginning to re-emerge and once again breakaway
from that group mentality.


Being an individual was always important to me. Even within the confines of this hell.


I used to alter my work dungarees by printing The Doors (one of my favorite bands) in white indelible ink on the back pocket, instead of my name as regulations called for.


I figured that people already knew my name, but they didn’t know what kind of music I liked.
Well, now they did!


This didn’t always go over too well with the higher ups. But I just yes’d them to death
when they told me to change it,
and went on my merry way.


They didn’t like the fact that I pasted
a bumper sticker representing another
favorite band of mine, The Who,
on the front door of the shop either! 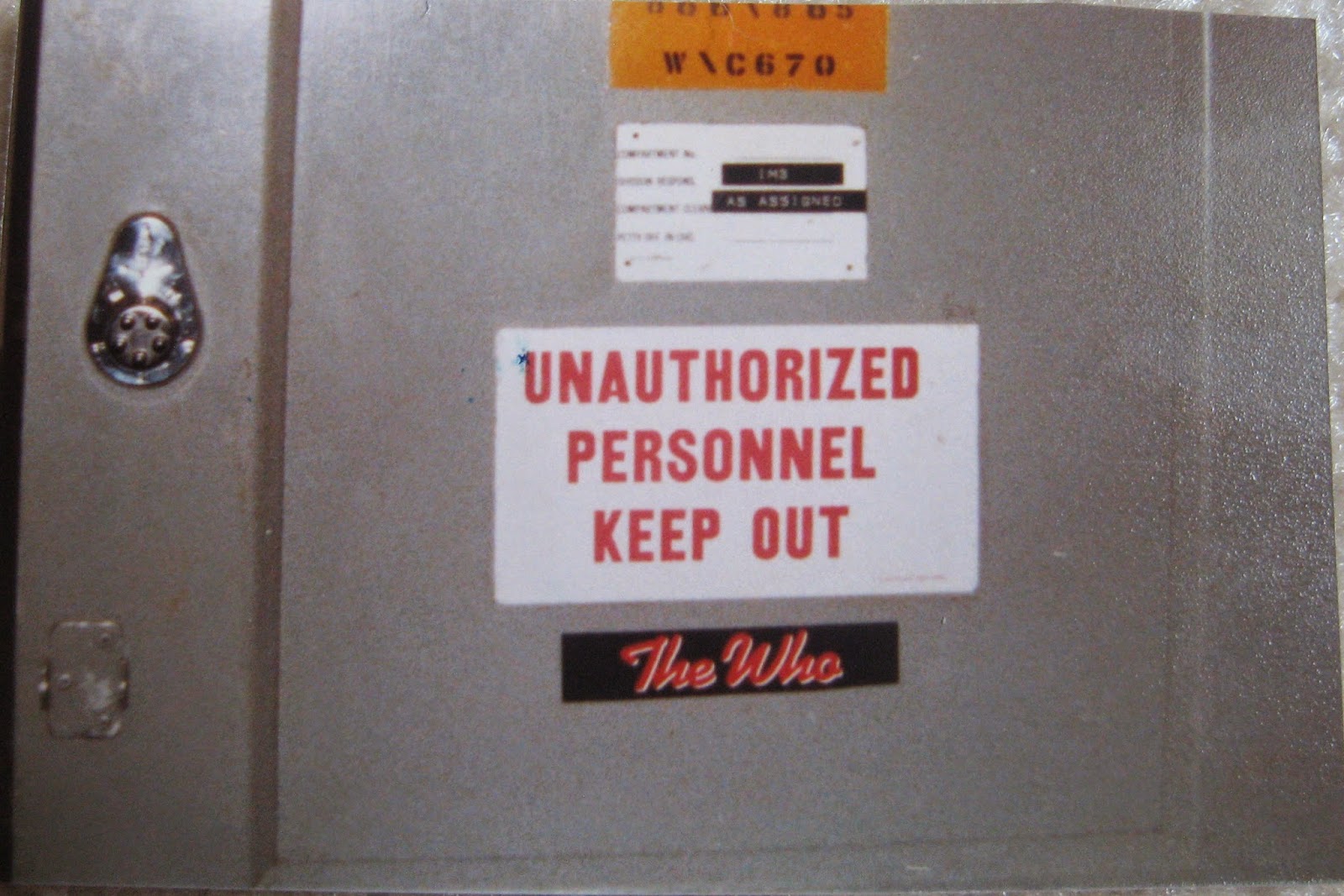 Hey, I was only tryin’ to keep my surroundings as close to home as possible. That lasted several months before someone actually noticed it.


We used to have some real fun when we were docked at the Norfolk pier. You see, when the ship was in port and not out to sea, you were supposed to salute all officers
as you crossed paths.


Oh boy, does this reek of a good time or what?


We used to troll the hanger bay,
which was prime saluting territory.
(The hanger bay was a gigantic open area, one level below the flight deck. They would perform all of the maintenance on the planes here, before taking a huge elevator up to the flight deck)

I would see an officer approaching and then just as I was supposed to salute, I would jerk my arm up a couple inches, and stop.


But, officer Dickweed had already committed himself to the salute, and followed through with the whole ridiculous ritual. I would just keep walking right on past him,
crackin’ up the whole way.
Beautiful!


Now, about 90% of the time, the officer felt like too much of a dick to make a scene. So, he usually just threw his hand back down to his side and kept on walking.


But, every once in awhile you’d run across an uptight a-hole, who just couldn’t stand being made the fool. Then, the joke usually backfired, and it was me that looked like the dick.


I’d usually get balled out in front of everyone, for the non-salute. And the idiots I was walking with would all bust my chops afterwards.
Hey, win some, lose some!


Oh, here’s something
that was completely unnecessary.


Remember I said I worked twelve hours on, and twelve hours off. Well, that friend of mine, Billy, from a few stories back worked up on the flight deck. (Remember, he used the birthday poem I wrote in boot camp and got busted by my
ex-wife... his cousin! LoL There's just NO fucking mercy in this world is there... LoL
A dude can't get away with ANYTHING
when it comes to chicks!)


I met him while I was in Tennessee, and somehow we both ended up on the same boat
as our next duty station.


Anyway, Billy and his crew had the opposite hours that I did. When I was sleeping, they were up on the flight deck, handling F-14 jets.

So, during break time, they would come down to my bunk and pay old Ozzy a visit.
Unexpectedly, of course!


Now, these bunks were pathetic.


They were about three feet wide, by about six or so feet long. They stood three bunks high,
with an adjacent bunk along side.


There was a metal wall from your head to about your waist down the middle, separating the adjacent bunks. A curtain separated
you the rest of the way.


Well, I slept in the bottom bunk. And this bottom bunk would fold up, and latch onto the bunk above it. This way the birthing crew could mop and wax the floors underneath.


Can you see where this is goin’? 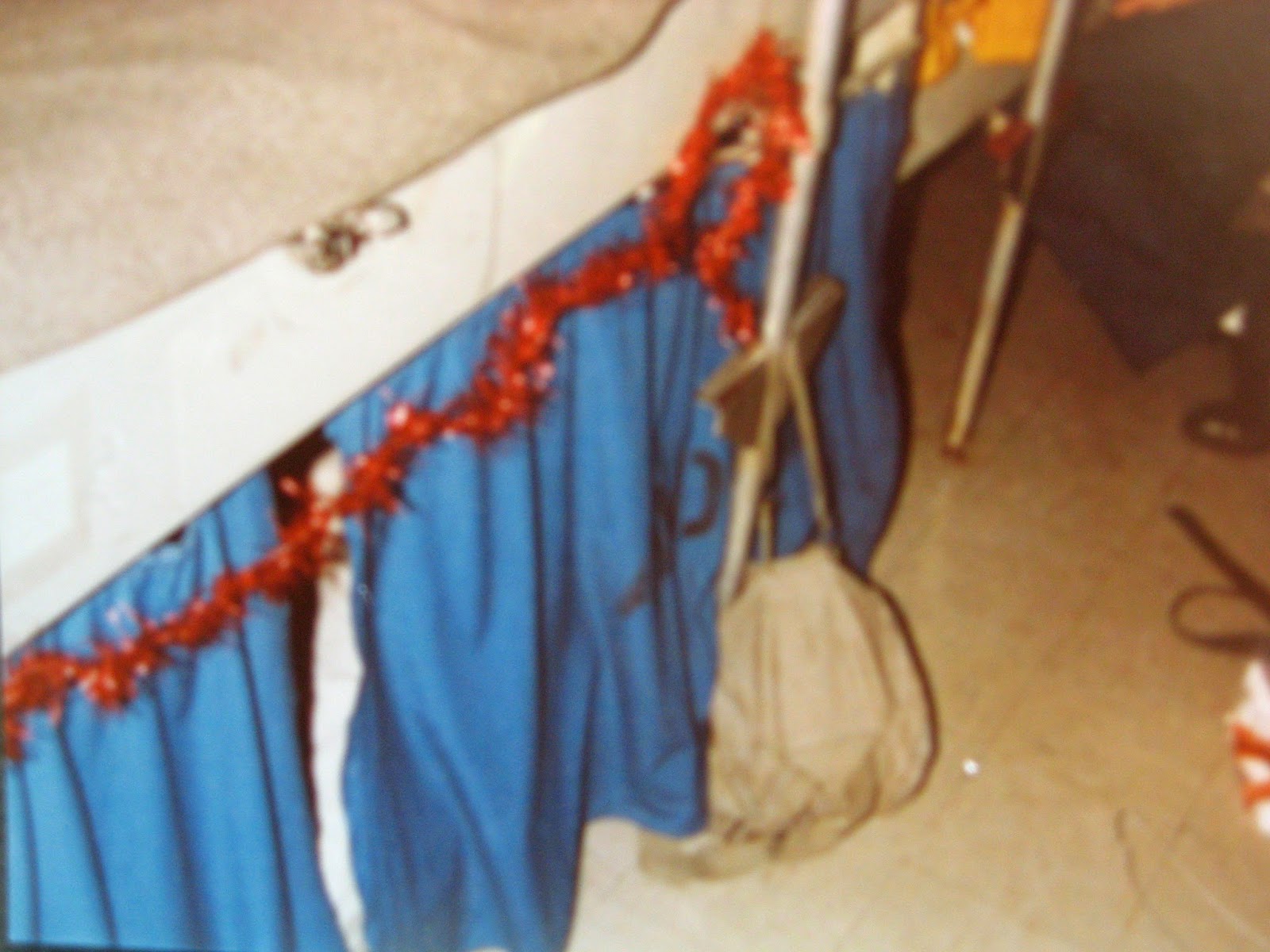 So, of course, the flight deck dickheads would come down to my world,
and do one of two things.


They would either walk up to my bunk while I was reading or sleeping and fold it up, and then latch it to the bunk above mine, leaving me in quite an awkward position inside.


And then stand there for ten minutes,
and watch me do my best impersonation

of a fucking worm, as I struggled
and wiggled my way outta the end opening.


Completely nude, most of the time!


Then, those dickheads would have a great big laugh, punch the shit outta me, and head back up to the flight deck. I still have the black 'n blue's... LoL


Or...
they would wait until I was fast asleep. Grab me by the feet, and pull my sleepin’ ass outta the bunk, and onto the ice cold tile floor.


Then, disappear before I would even wake
from my slumber.


I would just be lying there on the floor, like a fish who just jumped outta the bowl, usually with no clothes on, trying to gather my wits
enough to crawl back into bed.


And this was called fun!?!?
C'mon... how fuckin' retardedly funny is that!!
Just picture me squirming around on the floor, drool covering my cheek, shivering on the cold floor, trying to crawl. LoL

Now if that isn't love,
I don't know what is!


It all evens out in the end though. Ya see, I worked in a climate-controlled shop, nice and cool like I mentioned earlier. While those fuckheads all risked their lives every time they stepped out onto that flight deck.

Truly amazing stuff lemme tell ya!
I've seen it first hand...
it takes a very special person to be up
on that flight deck during flight-ops
and function with precise precision!
Really something to see! 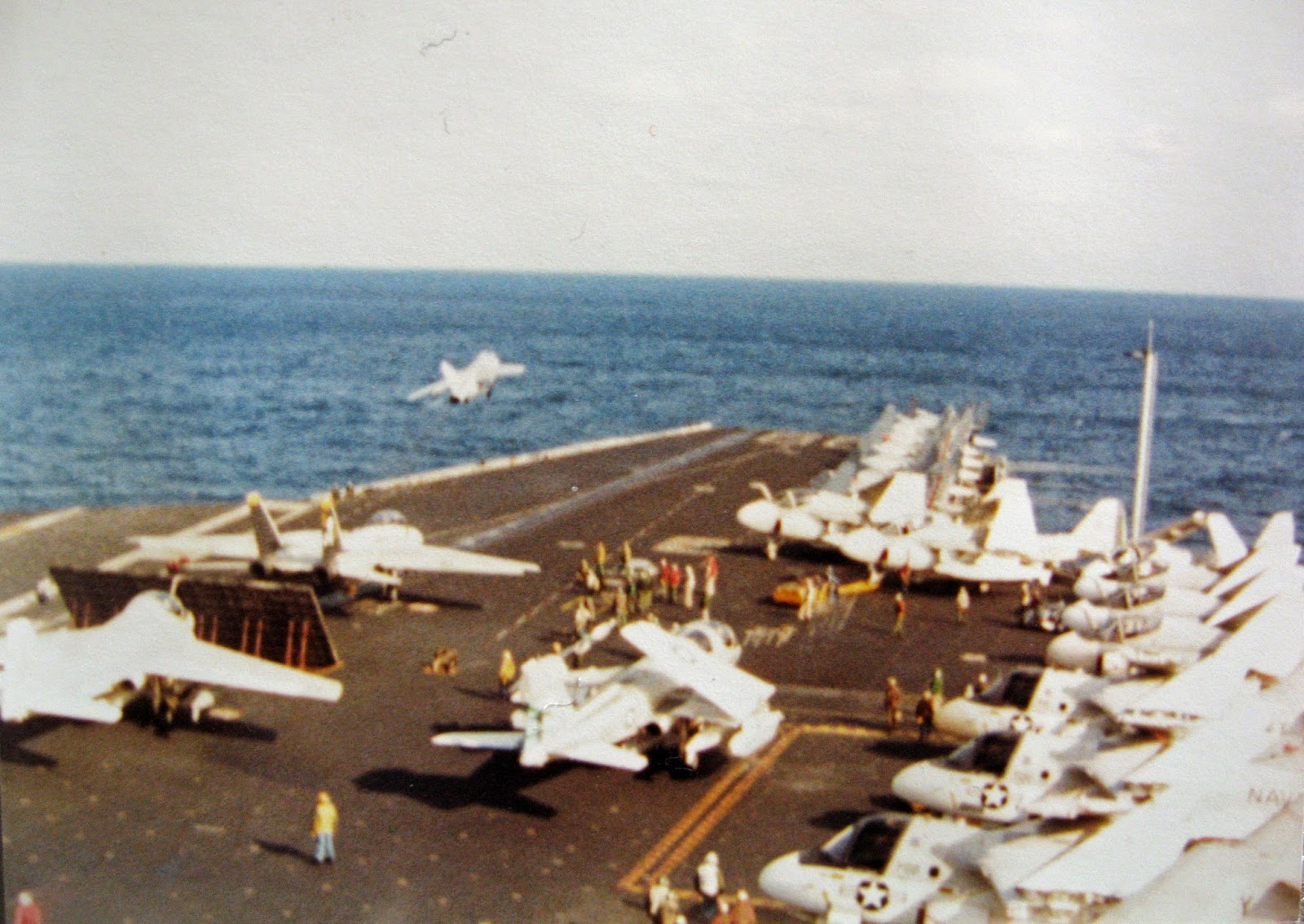 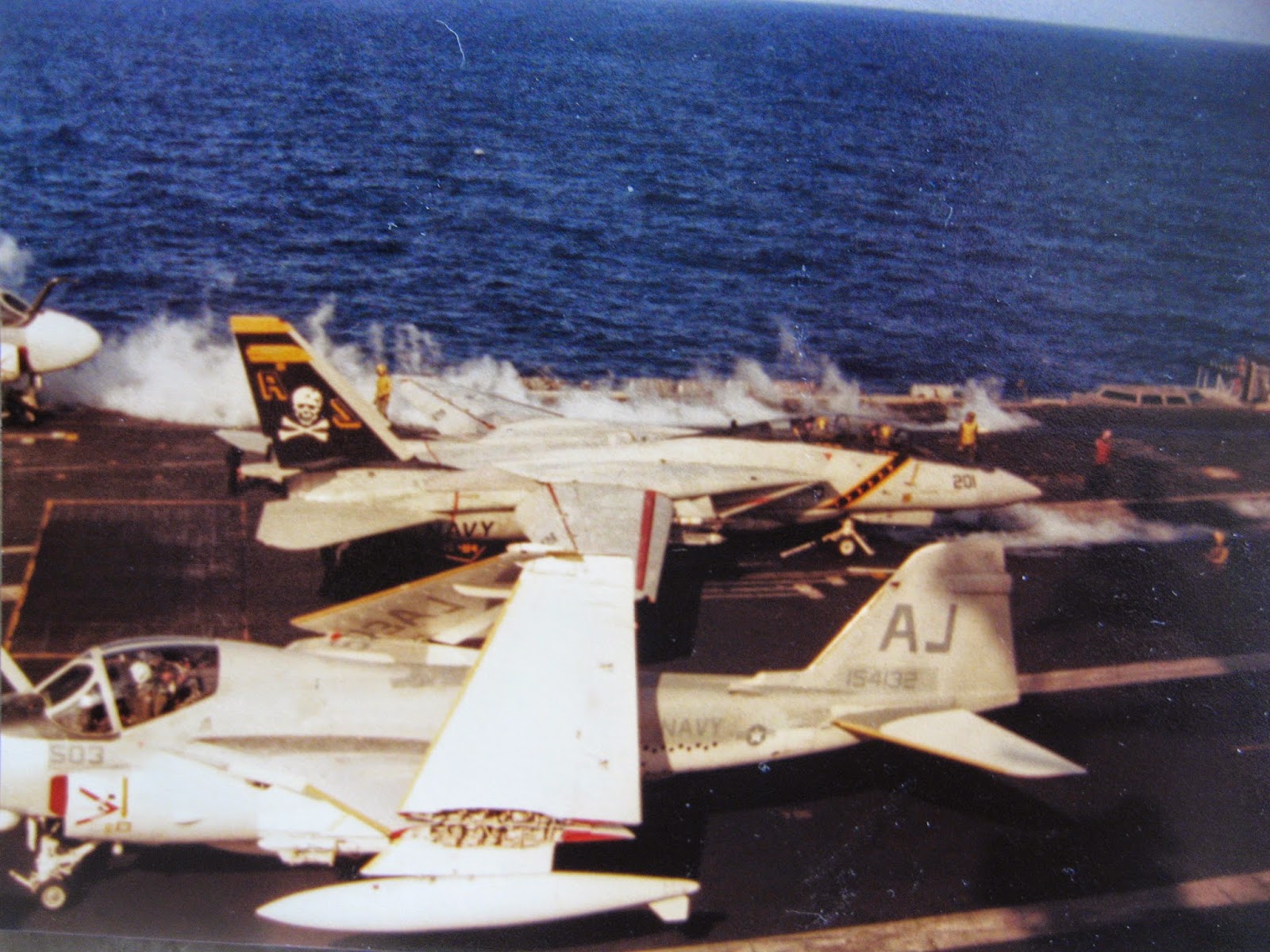 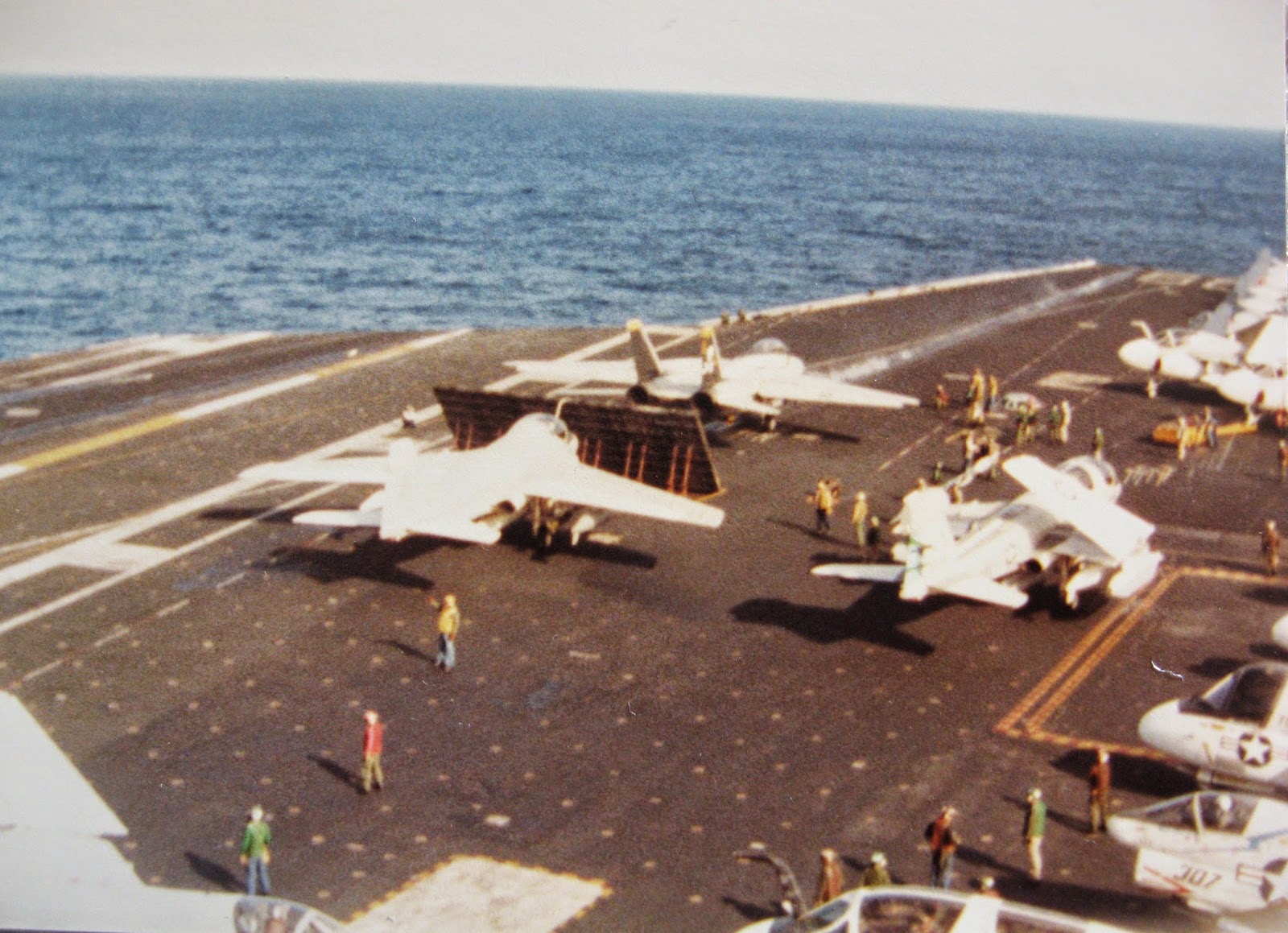 So, I really couldn’t get all too pissed-off at them. Besides, what are friends for right.
If they can't fuck with you, then who can?


So, if you’re a person who likes their sleep, then being on the USS Nimitz was not a place for you. Especially, if you had friends who worked
up on the flight deck crew!


Oh yeah... I once looked down while I was taking a shower as the ship was enduring the brutal pounding of a very intense storm while in the Mediterranean Sea. I mean waves crashing over and onto the fucking flight deck intense, which is 100 feet above sea level!


I felt woozy... threw up... and was seasick
for the next 3 fucking days I shit you not!


The only time my world wasn't spinning around me was when I laid still on my back in my bunk. It was the craziest thing ever!
I think I feel a bit woozy at the moment just remembering that nightmare!


So much for having sea legs huh?! LoL

Came upon a few more pix.

First one is of Billy on the flight deck with one of the cooler... more crazy muthafucker's. This was when Billy was a Blue Shirt Fly 1 Division.
I believe they were the guys who secured the planes down to the deck eye-pads
with the chocks 'n chains 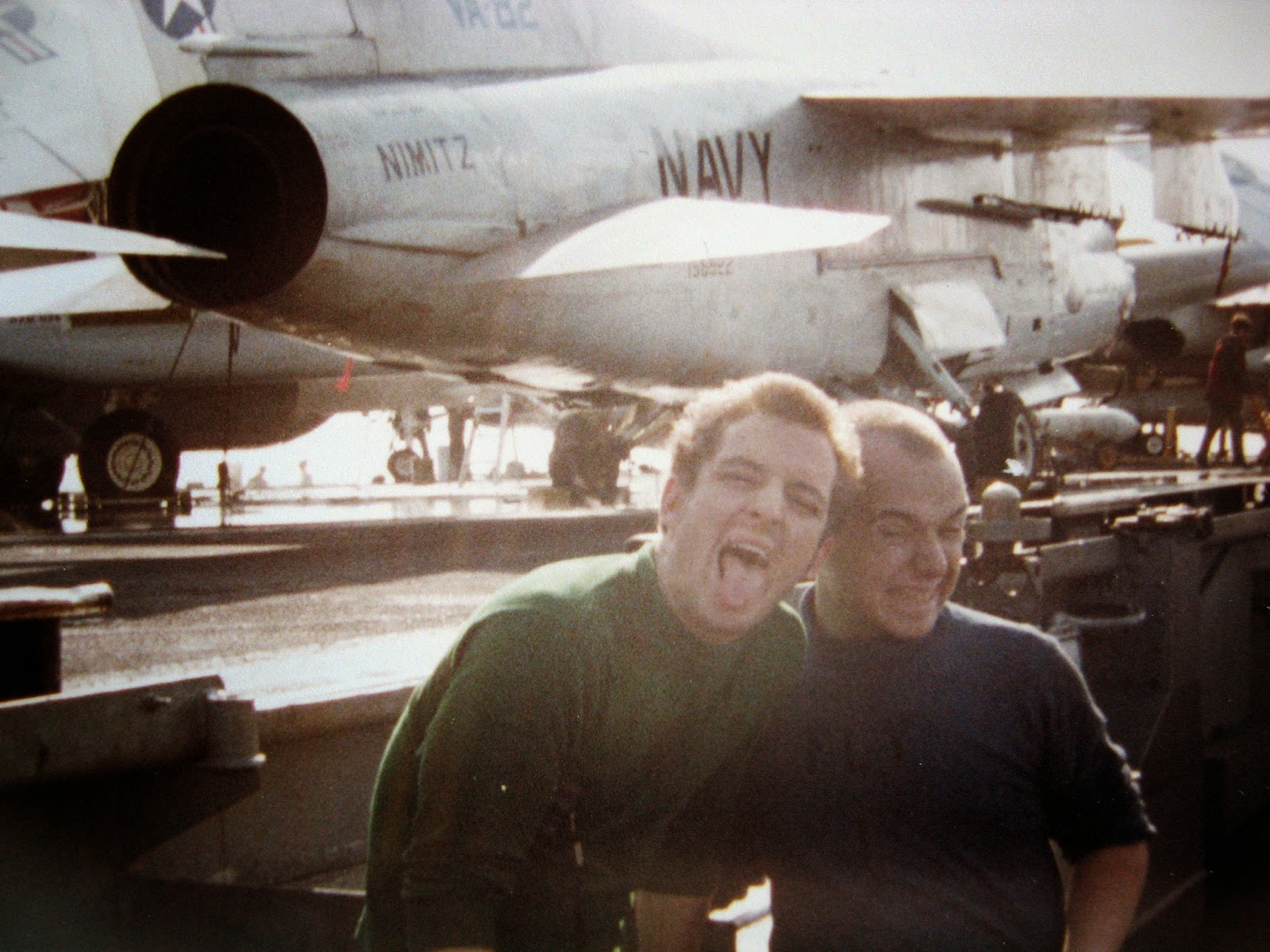 Billy was also a Red Shirt.
They were the Crash 'n Salvage guys.
When I was running away from the destruction,
these fuckin' guys would run towards it
just like the FDNY or NYPD... awesome!
I don't think thats Billy in the photo,
but that's one of the crash vehicles. 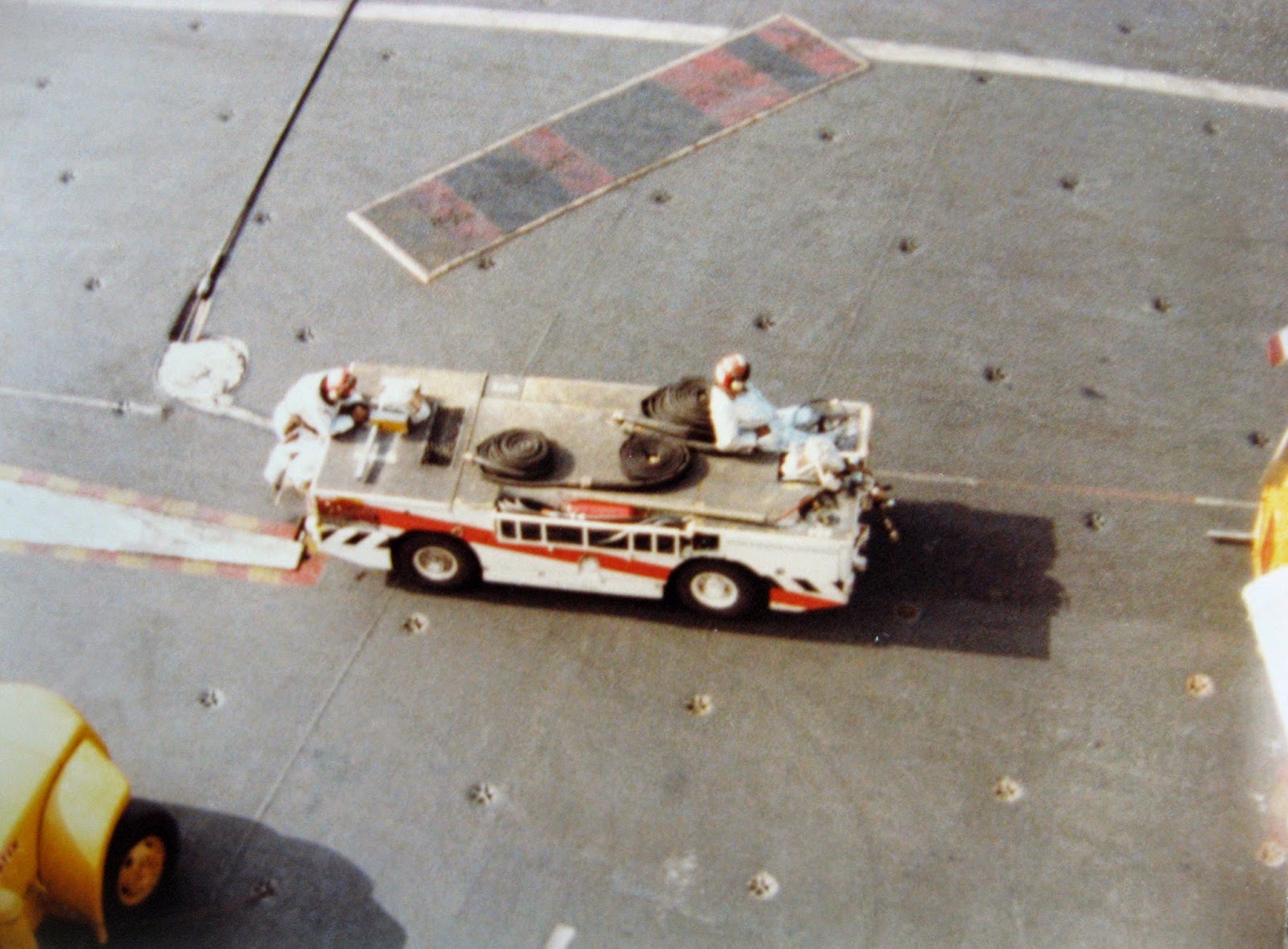 Billy's pals on the deck.
Now what the fuck "I" was doing up there snapping photo's I'll never know... LoL
You'll read about my one and only time I was on the deck "during" flight ops in the near future.
Believe me when I say...
I'm a real pussy!
And I don't belong up there at all... LoLoLoLoL 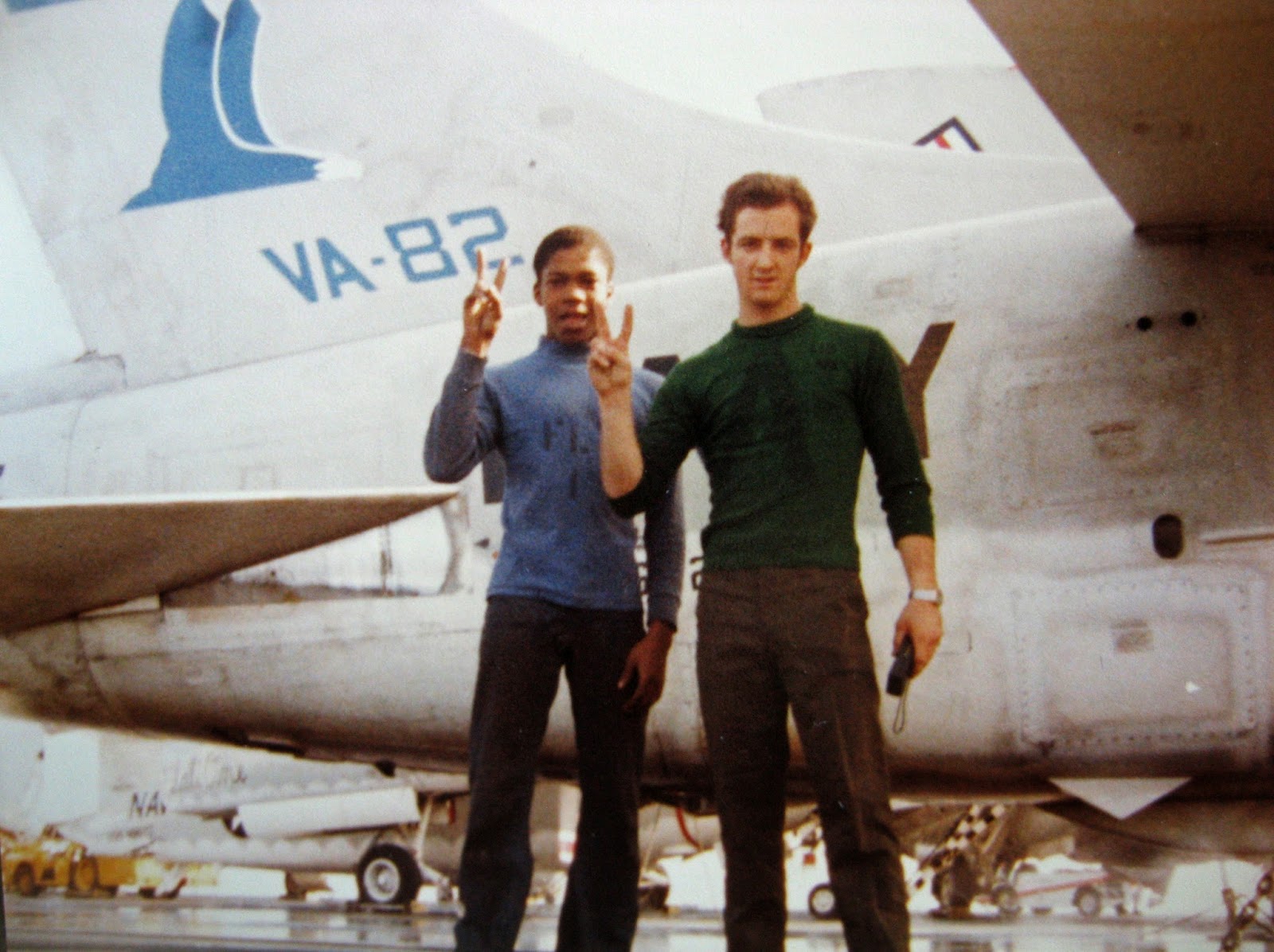