Words From The Attic... Wait A Minute

I believe I penned this one
just before I went into the navy.


I moved out at 19 and had my own place...
it was too awesome. But I do remember
that some nights when there was no one
around to hangout with, I'd go park
my car in the beer distributor's
parking lot on Victory Blvd
in Staten Island.


I'd sit on the hood of my car...
The Doorsmobile
Drink beers
try to play Dylan songs
on my acoustic guitar
and pen tons of emotions
down on paper.


I was a really weird muthafucka.
A little different to say the least.


But they were some amazing moments.
Sometimes...
hanging out.... without... the gang
was just as memorable.


Sometimes up
sometimes down
sometimes in the middle
sometimes... it was perfect! 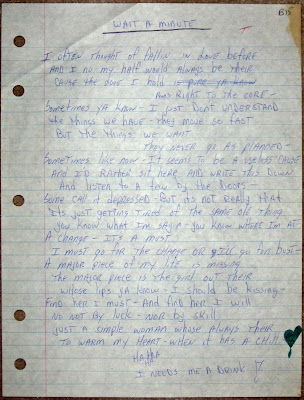 Email ThisBlogThis!Share to TwitterShare to FacebookShare to Pinterest
Labels: Words from the attic... my bad poetry from the early 80's