Song of the Moment

I listened to a U2 song the other day, BAD,
from their Unforgettable Fire album and it transformed me right back to a magnificent day.

The day I was lucky enough to attend
the Live Aid concert on July 13, 1985
at JFK Stadium down in Philadelphia.

Here's a ticket from the
Wembley Stadium portion of the show
in London that was happening pretty much
at the same time as the Philly show.
Both concerts were all day long affairs! 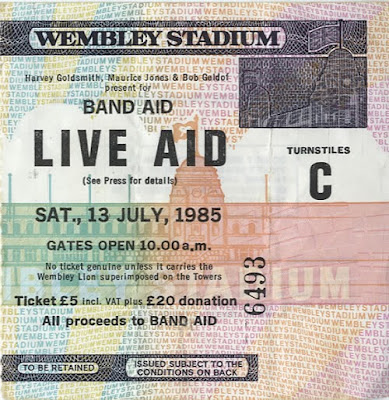 It was a day filled with complete madness!

So retarded.
There was a watermelon with 2 bottles of liquor jammed into either side, being absorbed
into the melon. Then it was cut open.

And now we get to the retarded part.

You stood over it...
and just fell forward face first...
into the melon and sucked for dear life... LoL

Another funny thing was being in the "men's" bathroom. It was so fucking disgusting.

It was so hot that day, that someone broke an exposed water pipe to cool off, and it filled the entire bathroom with a foot of water.

So you're standing at the urinal peeing...
while standing in a foot of pee-filled water... LoL Why stand by the fuckin' urinal!!!

But even more funny, was the fact that while you were standing in that pee-filled water at that pee-filled urinal... there were girls actually squatting and peeing in the urinals next to you. Because the "women's" bathroom was packed... LoL

But anyways...
I just wanted to share with you guys a few high points for me that day when it came to the music.

Thanx to Gregg P. for hooking me up
with the last minute ticket. And to Kenny D.
for driving us drunken losers there...
and back... in one piece!!

I still have the show program from that day. Can't find my ticket stub, but the program really is pretty neat! Can't remember if I bought this myself, or I have a feeling that my brother Michael got it for me. He was there
at the show as well.

How I got it really doesn't matter though,
but the awesomeness surrounding it... does! 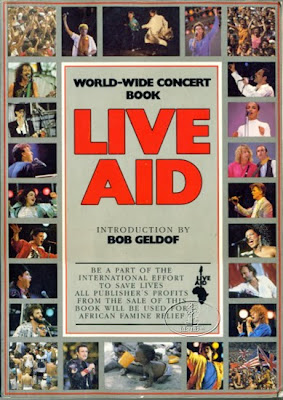 Here are some great memorable live performances for me from that day.
From the Philly show AND London.
(Parts of the London show were shown on big screens on either side of the Philly stage.
Not sure if I saw all the London stuff that day, or if it became influential
to me over the years. Sucks that you can't recall EVERYTHING doesn't it!!)

Regardless if you like the band or not...
you have to admit that it was a very
powerful performance!

The camera views from
behind the band looking out onto the crowd
just give me fucking goosebumps man as they
rock the fuck out... in unison.
Fuckin' Freddy Mercury was one
talented muthafucka!


The Who
Love Reign O'er Me
Won't Get Fooled Again

Not their finished moment by far...
but they stopped their band squabbling
long enough to contribute their time
to a great cause! There were
technical problems with the feed
so we missed a song or 2 from them.

Roger fucked up WGFA,
Pete just wasn't into it really...
but they ended the set strong!
How could you not love them.


Bob Geldorf
The Boomtown Rats
I Don't Like Monday's

And oh,
how could you not love that song!

I remember listening to this song like it
happened just last night!
I was leaning up against a wall in one of the entrance walkways watching the stage
in a semi drunken/heat exhauted/face the melon kinda perfection all by myself smiling ear to ear.


Neil Young
Sugar Mountain
I could listen to Neil all day!

They went on even earlier than Sabbath did...
a great way to ignite the melon buzz!!

These fuckers are great.
I haven't always been a big fan...
but if you watch the performance of
these 2 songs and aren't moved in some
way than you muthafucka, just may be dead!

Bono, not unlike Freddy,
is a fantastic entertainer!
And here's proof of that.

The link below is a very interesting
minute-by-minute description
of what was occurring on stage...
and off... during the second song, "Bad".
And I had absolutely no idea whatsoever that things were going down as they were. And I bet you're going to be as well. Anyone who watches this performance, whether a fan of the band or not, and DOESN'T tear up... is not human!!
Just so fucking powerful. And I know, I know... it's just some stupid rock band from Ireland.... but there's just something about it that kicks my ass EVERY TIME I watch it!!
Check out pure awesomeness...


Phil Collins
In The Air Tonight

This maniac performed at the London show
and then hopped on the Concord and
flew to Philly to perform there as well just
hours later. That in itself is one
of the coolest rock 'n roll things
I've ever heard.

He then played drums for the Zeppelin reunion later in the show. And almost fucked up
Stairway To Heaven... LoL

Phil may not look like it...
but he is bad ass in my book!


Black Sabbath
Full set
You just can't go wrong here.
They came on stage just before 10am.
This was the first time Ozzy played with
Sabbath since he was asked to leave
the band back in 1979.
The assholes at MTV missed pretty much
the entire first song... Children of the Grave.

There were others... many!
But I'm lovin' these right here.
Queen and U2 really stole the show.


Any memories for you guys out there?
Were you lucky enough to be at either show?

Email ThisBlogThis!Share to TwitterShare to FacebookShare to Pinterest
Labels: Song of the Moment